SharePoint 2013: Search Service not working due to lost permissions

I was delivering a training session in our London office 2 weeks ago, while I was interrupted for an urgent issue for a client that could not wait as this was their live system and the current support provided had no success in resolving it. Briefly - Search not working. SharePoint 2013. I jumped in and there were some actions already tried by the support provider, but mostly restarting the Search Services on all servers. That didn't help. The client production configuration is (the issue did not occur on any of their dev/test environments):


The user experience looks like this on any query, executed from anywhere (and that just happened to occur out of the blue):

The Search Service Administration page in Central Admin was showing "All Errors".

The event logs on the APP servers were all flooded with EventID 1357 containing this:

.... and a lot more errors related to Search as a consequence of this.

That's SP2013 + SP1 + only 2 security updates released in May this year.  No updates applied after that and everything was working as a charm for 6 months after we've built it. I was given info that there were some network issues experienced just prior to that issue, but I did not have enough data to correlate both.

I know that's not the best solution, but the only one I could think of in the limited amount of time available to fix this production system - add the permission to the account manually in SQL Server Management Studio. Go to your Search Service Application database (the one referenced above in the application error from the event log, then go to Security -> Users and select the account you use for running your Search Service Application pool, it is also shown in the event log under the error.

In my case that's a dev system on which I've reproduced the issue for the purpose of this post:

On the Membership section, verify the SPSearchDBAdmin role is selected for the account, if it's not (like it was in our case), add it and that should fix your problem. Might need to restart the Search Service again on all the servers running it - we had to do that in our case to get the Admin Component up and running in addition to the Query Processing Component which started working properly immediately after the database permissions were restored. 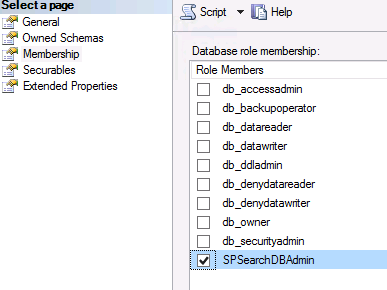 We still do not know the root cause of that as the environment was handed over long time ago, initially thought that Search in 2013 is very sensitive to connectivity to the SQL Server as I've seen the issue with lost permissoins twice, and the first time was a reboot of SQL definitely causing it. Then I stopped the SQL server on my dev environment for a while to see if that will happen and it didn't, it must  be something else then. And yes, we do use SQL aliases, but we only had one SQL server in that production environment. Hopefully that helps you solve such critical issues quickly.