This post might not be as helpful now as it would have been a year ago due to this improvement. Now Yammer DirSync could be used by organizations requiring Yammer SSO, previously it was used by each organization wanting to sync users from on-premise Active Directory to the Yammer network. More info on how to implement Yammer SSO, which is a different scenario can be found here.

I won't be trying to reinvent the wheel in this post, as there are plenty of good information sources on the Yammer DirSync implementation itself, like this one, but I'd rather share the limitations and issues I've faced when I had to meet a requirement to implement sophisticated filtering for the synchronization process.

The requirement seemed quite simple at a first sight - the customer wanted to synchronize users only from 5 specific OUs in their on-premise Active Directory domain.

Yammer DirSync (as well as the SharePoint User Profile Service) synchronization allows the use of LDAP queries. If you're new to those, you can read more about their syntax here.

The bad thing is, you have no option to query for a specific OU - and hence - no visible option to meet this requirement. The good thing is, there is a more advanced option to do this - partly a configuration cheat and partly modifications in the globalsettings.config.json file.

The first part consists of adding more than one directory source, but if the OUs that you'd like to sync are in only one domain as in our scenario, you have two options:

You can't use a load-balanced name if you have created one (as per the installation guide).
- Sync from the same domain controller if you only have one (very rarely these days) or the requirement is to sync from one 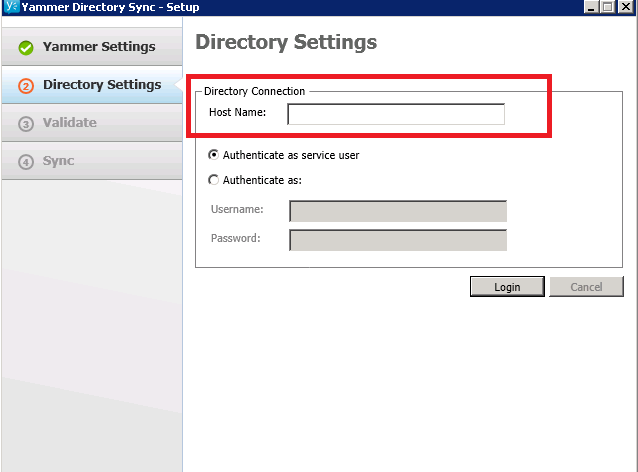 The only ways to add the same DC again are to use the FQDN or the IP address in addition ot the NETBIOS hostname. Later on you can change that in the config files, but you have to go through the wizard first.

The configuration files you need then are stored in C:\ProgramData\Yammer\DirSync by default.

To locate the globalsettings.config.json file on your Yammer DirSync server, you need to go to the Yammer icon in the notifications tray and then click "About": 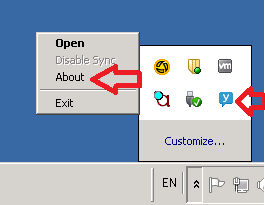 Then on the new pop-up window that you'll get, click on "Advanced Configuration": 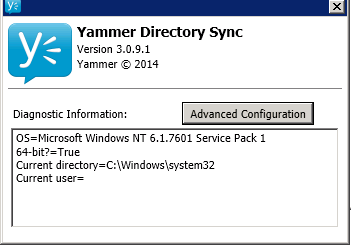 Email ThisBlogThis!Share to TwitterShare to FacebookShare to Pinterest
Labels: Yammer