For the first time, I've аttended SharePoint Saturday Munich which was a massive community event, held directly at the Microsoft DE headquarters (awesome office, by the way).

My friend and ex-colleague Alex Pavlov who is living and working in Munich and has been a part of the previous event in 2015 told me it was awesome and I should definitely go this year. So, I asked another buddy Ivan Yankulov, he thought it was a good idea and we formed the team.

We've traveled the 1334 km  (1:50 hours flight) to attend the free, community-organized SharePoint event and boy, I personally do not regret it!

This Saturday, the organizers (the great team of Rencore AB) invested in setting up two full-day pre-conf workshops (paid - EUR 125 per workshop, limited to 50 seats each) on Friday, March 3rd.

The workshop, targeted more to administrators was SharePoint 2016 Infrastructure Powerclass for Admins with Thomas Vochten.

As I currently do not work with SharePoint 2016, I chose go to to: PnP all the way – Reusable tools for SharePoint with Vesa Juvonen, Erwin van Hunen, Paolo Pialorsi and last, but not least our friend from Bulgaria Radi Atanassov. Sounds funny, right? Going abroad to listen to a Bulgarian speaker - well, unfortunately in Bulgaria there's no SharePoint Saturday anymore and we (about 15-20 of us) only meet up in the SharePoint User Group Bulgaria once a month. I believe it's a good idea to meet 400+ more SharePoint professionals from all around Europe (and even a few from US) so that we can catch up on the latest features, best practices and get aligned on the SharePoint future. And have a SharePint altogether, of course.

I must admit I've missed the first tickets in December and I've booked my place on 9th of January, when the 2nd batch of tickets was released. I was refreshing the site a few times that day :) After I've registered, I got frequent communication over e-mail with updates on sessions, time, logistics etc. There was everything I needed to know so that I just showed up on the first day at 08:15 with my computer and tickets printed (later, I realized I didn't even needed the computer).

So, here we are, flying out from Sofia, Bulgaria on Thursday, March 2nd around sunset time, just after wrapping up the work day. Our flight was delayed with half an hour, but check out what a view we've got in exchange for that.

So, after the landing in Munich, I took the Lufthansa Express bus to the Nordfriedhof station and within 15 mins of walking I was at my hotel, just steps away from the Microsoft office, where we'd spend the next 2 days, full of Microsoft and Office 365 knowledge. By the way, Germany is so well organized, that you don't even need to know German to get around, everyone spoke English, from the bus driver, to the hotel staff and so on...

In the morning, we were at the Microsoft office 08:15 AM and the registration was already running full speed. Even though we couldn't get our badges on time, at 08:30 we were in the workshop rooms, with a cup of hot coffee (by the way the coffee that Microsoft treats their employees with was not bad at all). 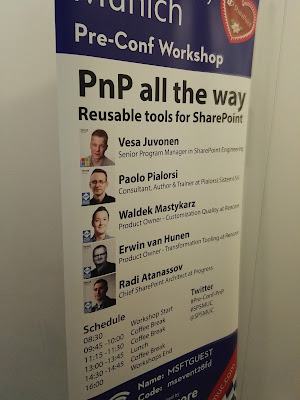 Our workshop was focused on everything PnP. I must confess I do not use that yet, but I am quite interested in starting to use it. I brought my laptop (and a few more people did) as I though we're actually going to use the samples and do something with them, but the day went more in a conference-like agenda. Anyway - happy with it, and I just gave PnP a try today so that I can create a solution that updates the SharePoint User Profiles (Delve in SPO) with data populated in a SharePoint list. For that purpose, I've used especially the PowerShell module on which Erwin van Hunen is working frequently.

Here's a quick selfie of the Bulgarian team @ the workshop. 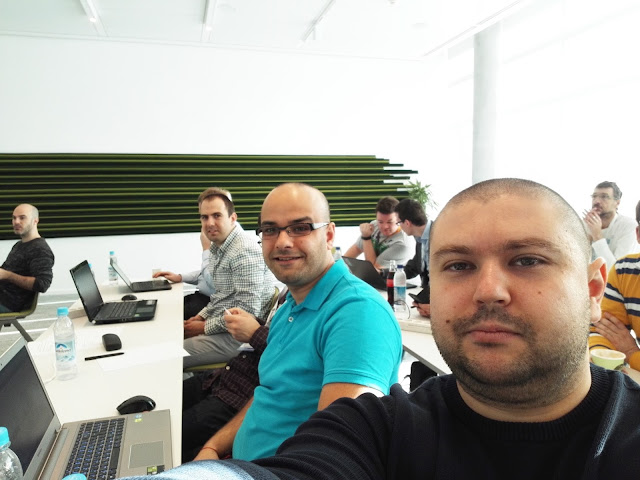 Even though there was a small fee for the workshops, the whole event would not be possible without the support from the sponsors, so I'm including the slide with their names. Kudos to all those great companies! 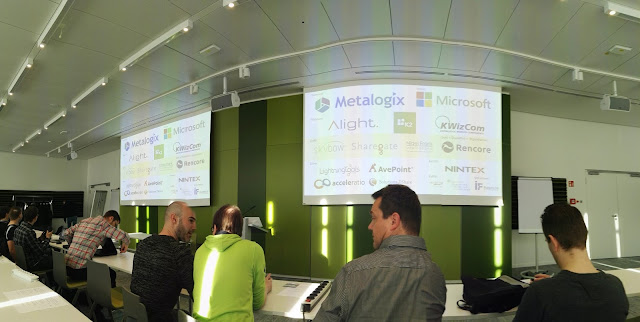 Paul Hunt mentioned on Twitter, that this was the best food on a SharePoint Saturday. While I can't compare, I think it deserves a few words. During all breaks, there were fresh fruits, pretzels, some small chocolate bites and cakes. Basically, thousands of calories :)

We've had lunch at the Microsoft canteen, and there were plenty of choices - some slow-roasted pork, pizza, pasta, sushi, soups, salads and freshly squeezed juices. Love it! During our lunch, Mathias Einig (who's the main person to blame for SPS Munich and SPS Stockholm) came to ask if everything's going well and if we're happy with the workshops. Great attention to attendees! 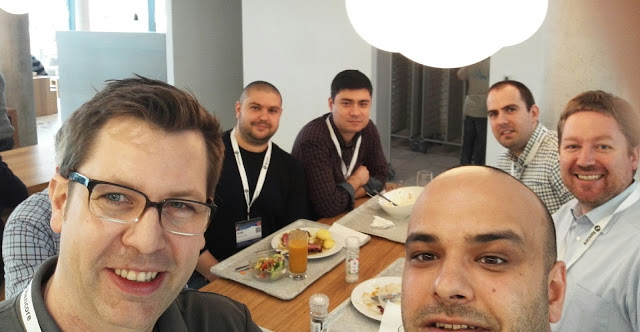 I've included this photo of my lunch as it contains something very rare these days - one of the 3 Microsoft phones we've seen during the event:)


After we were full of calories and knowledge, we ended the day with a 6-7 km walk through the Englisher Garten and a few beers (Maß, of course) at Augustiner Keller, which was recommended by Alex as a "local". The food and beers were great, I highly recommend this place, but you should make a booking, especially on a Friday or Saturday evening. There was a huge beergarten, so I'd love to come back here during the summer months. The same is valid for the Englisher Garten, it would be so green during the summer. It didn't matter for the locals, though as the beergartens there were full at 5 PM :) 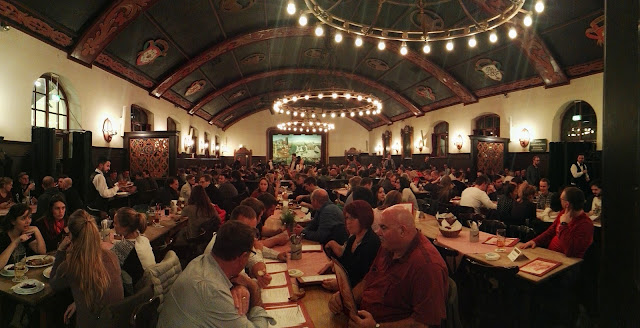 More info on Day 2 - the actual conference will come as part of the next blog post.